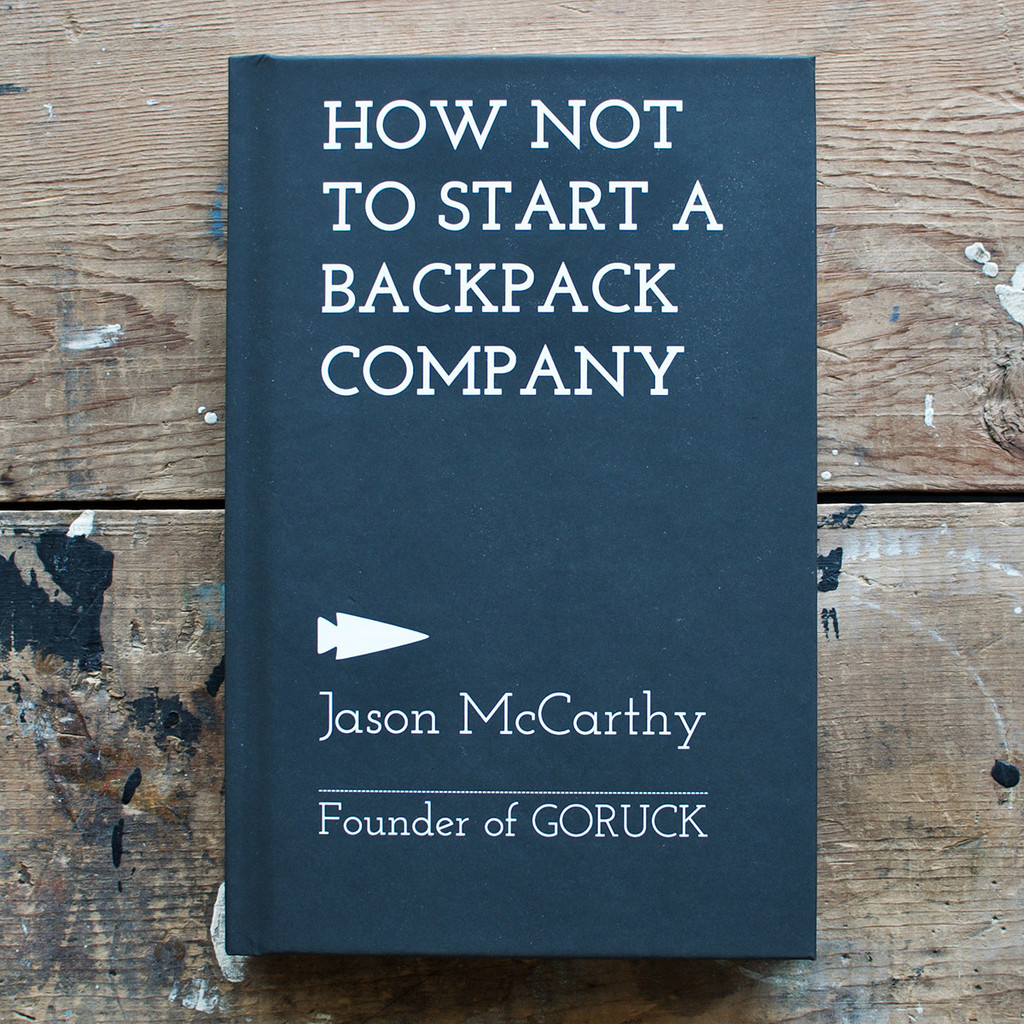 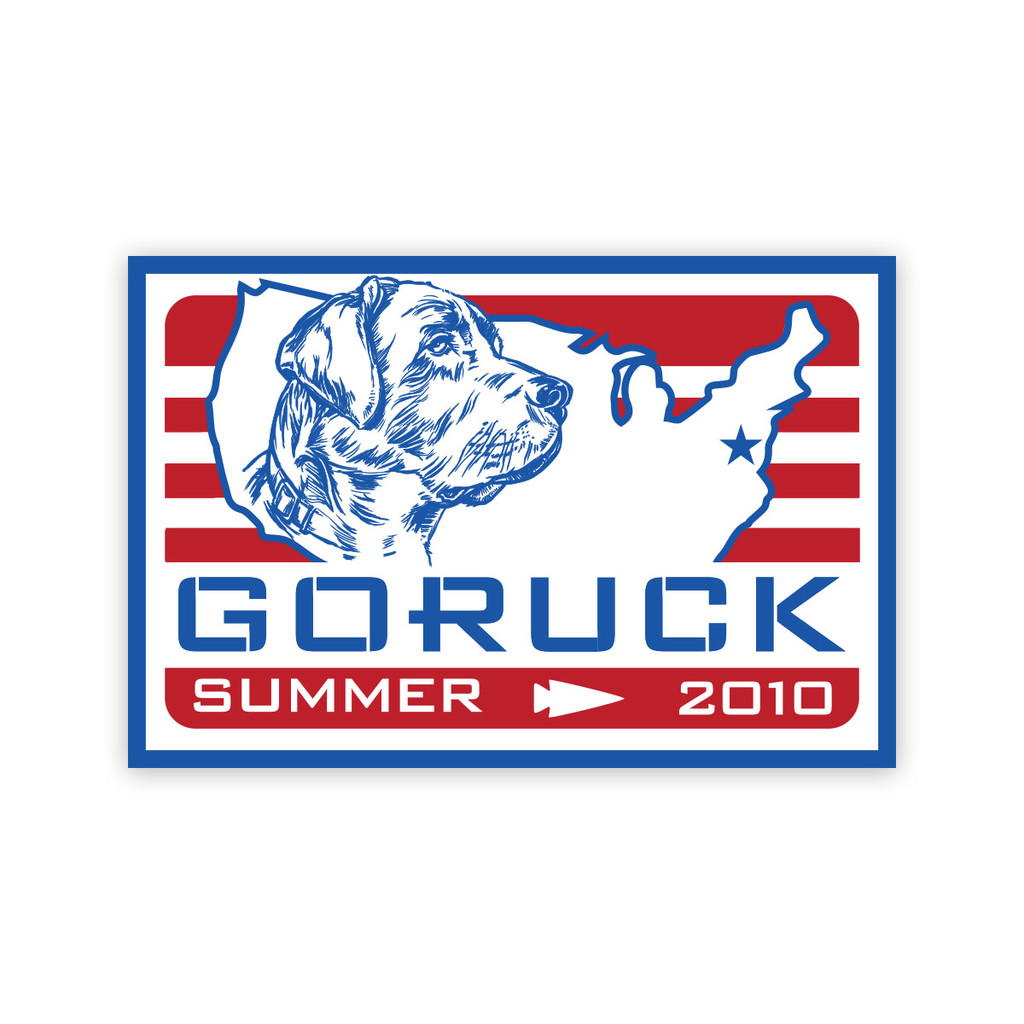 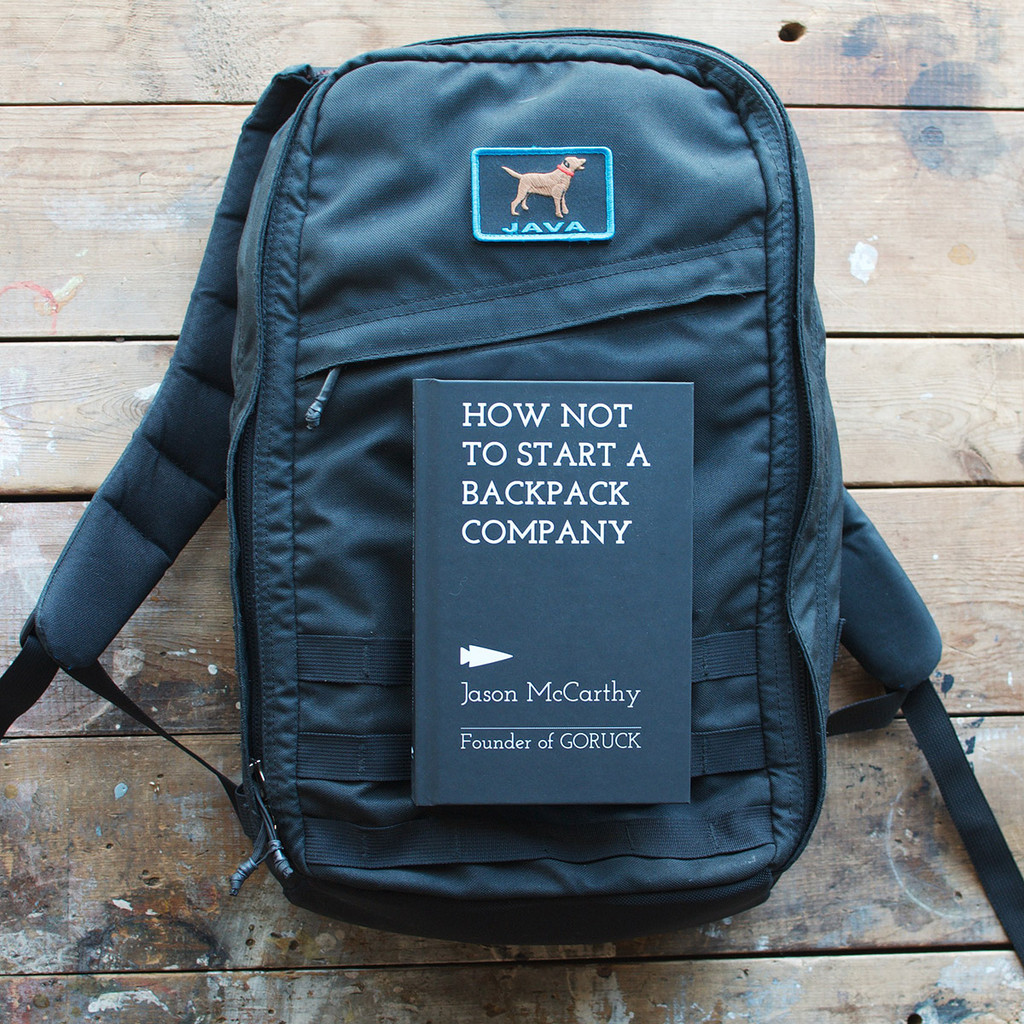 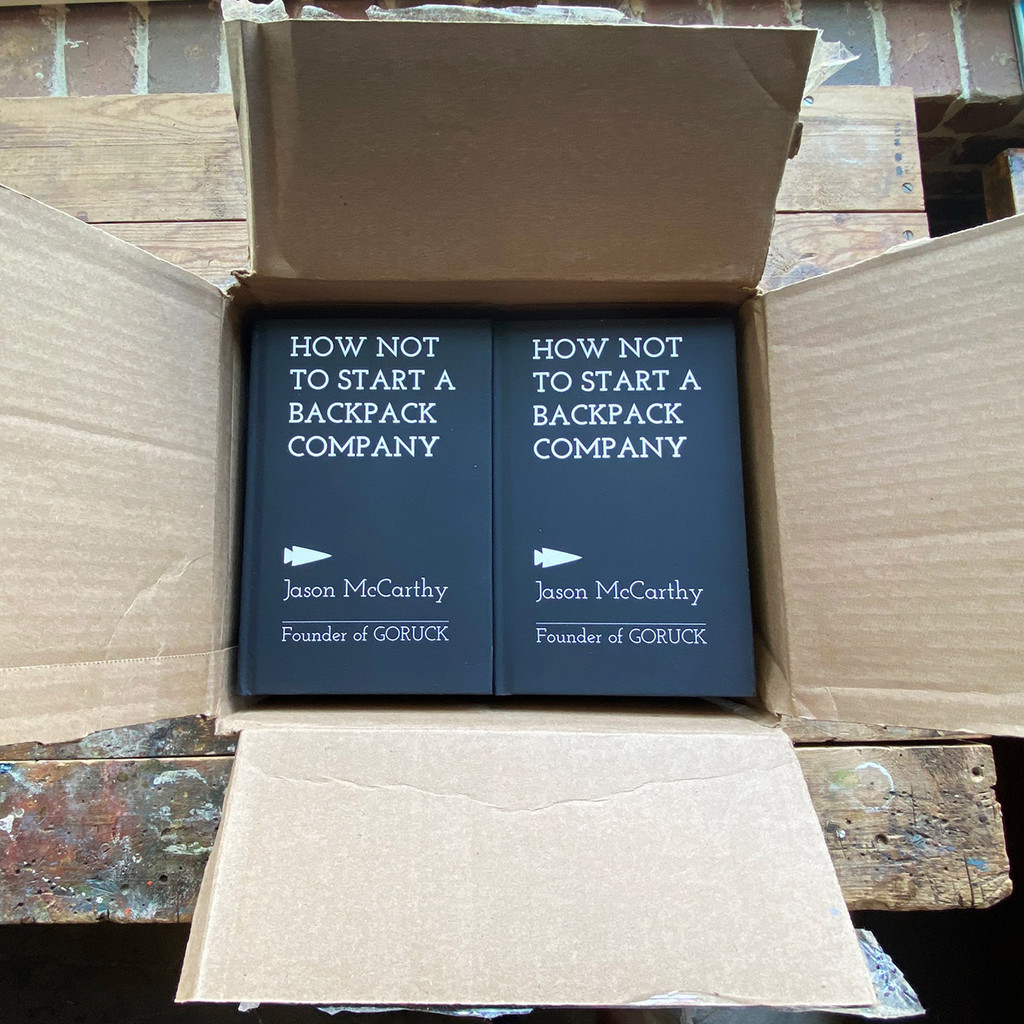 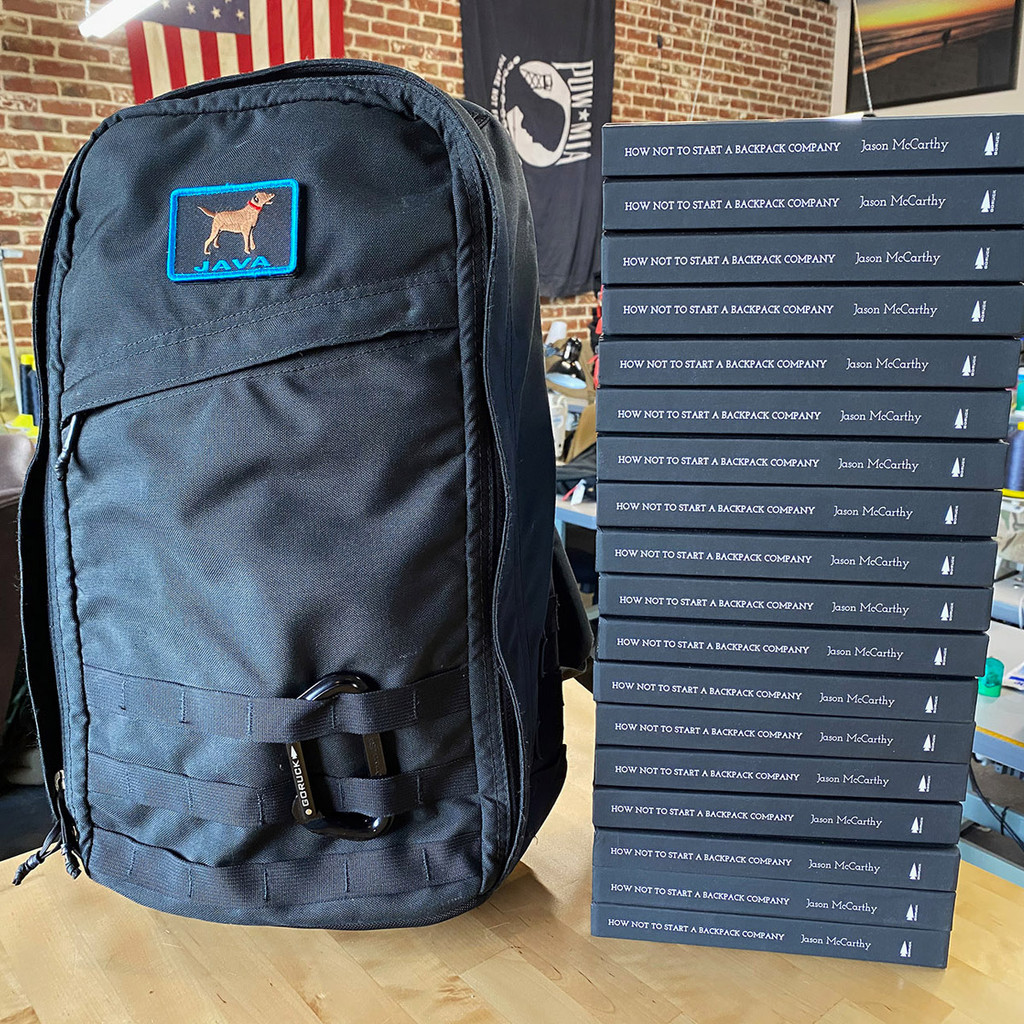 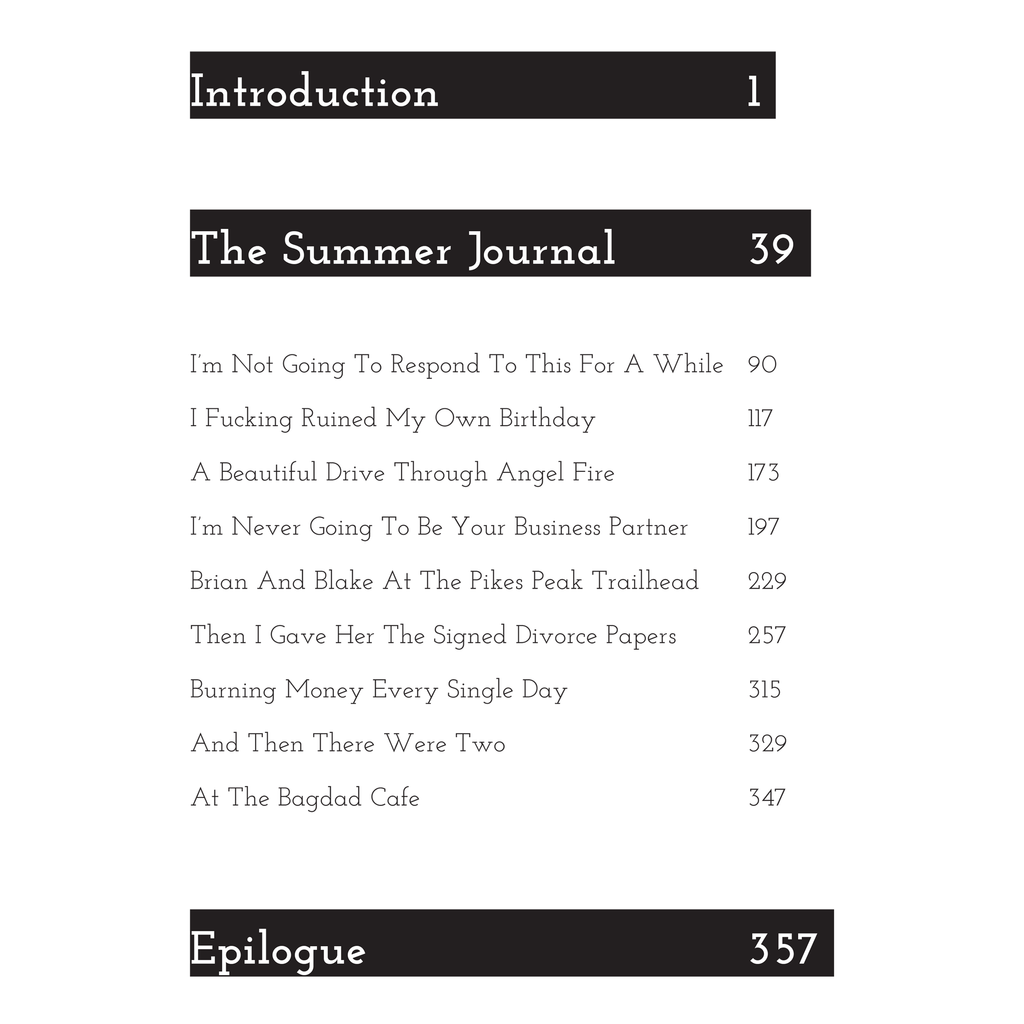 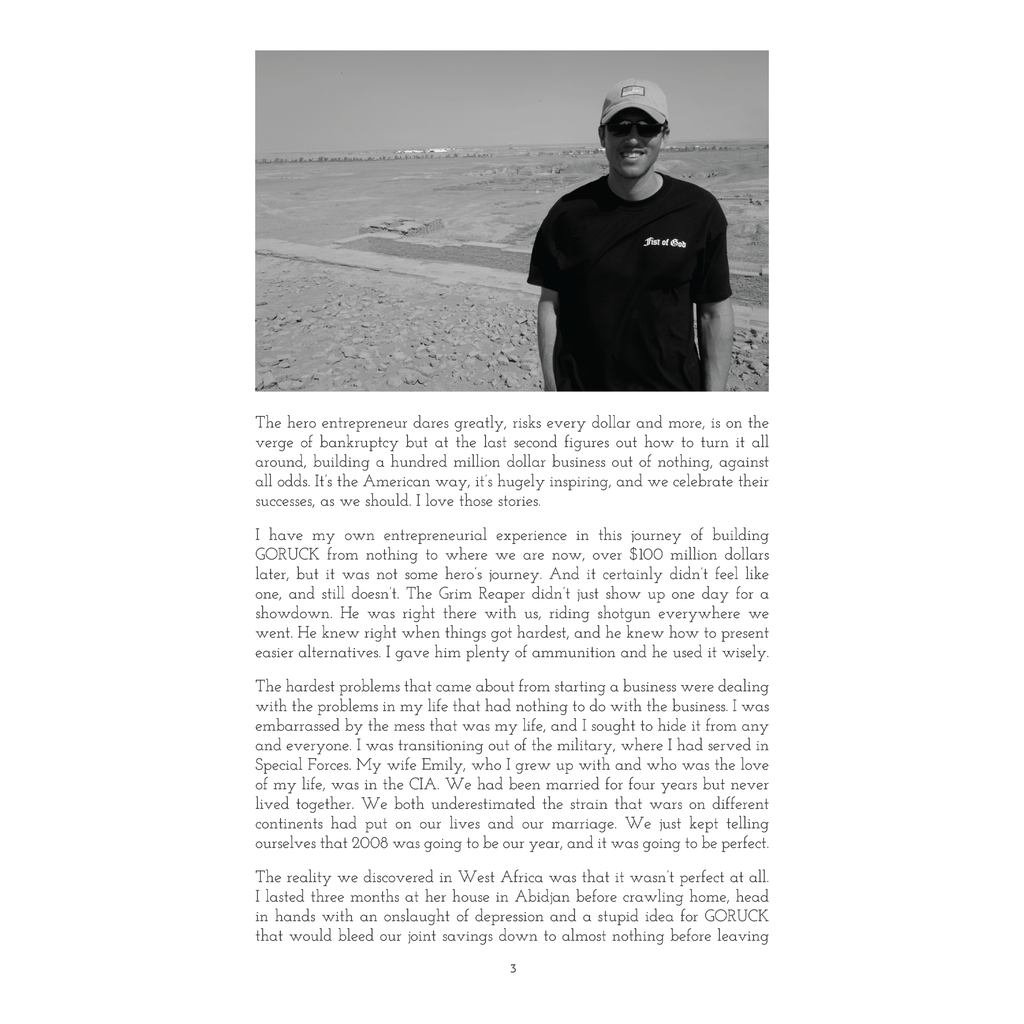 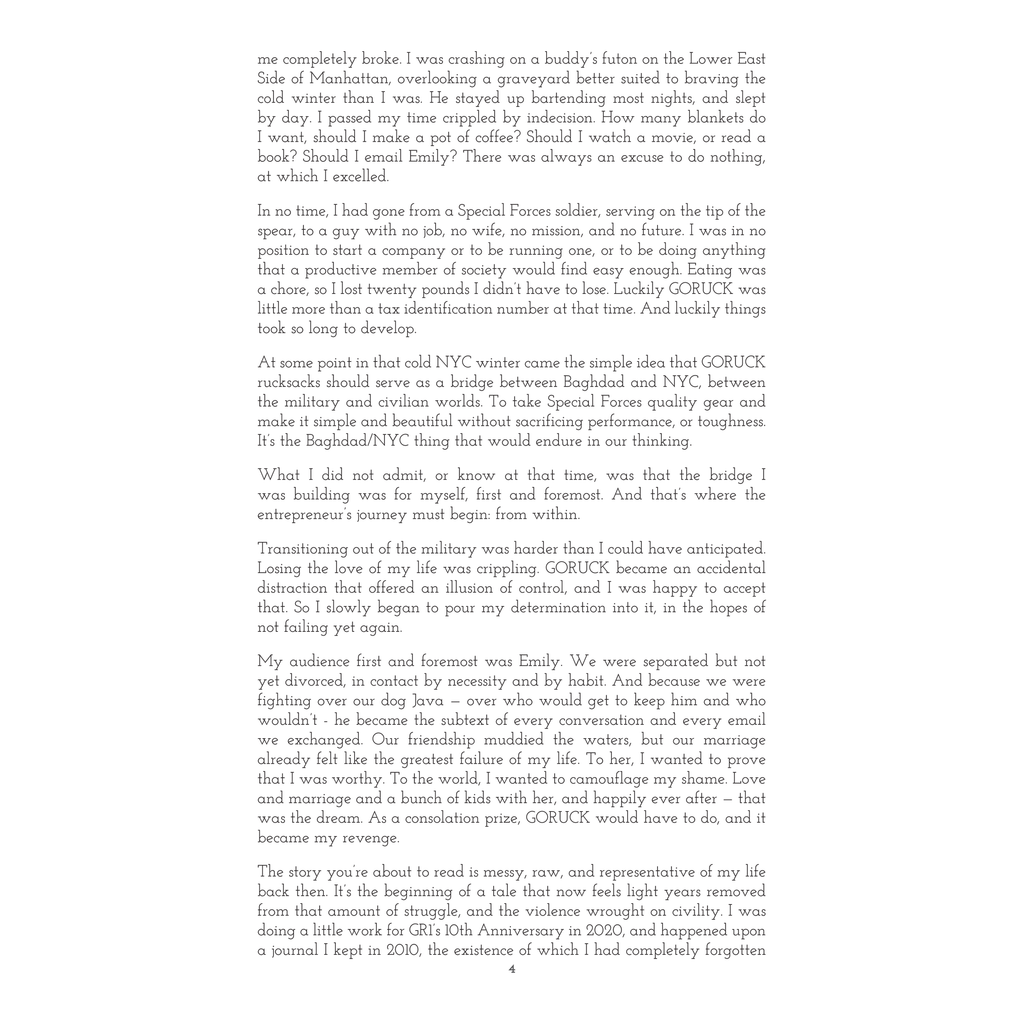 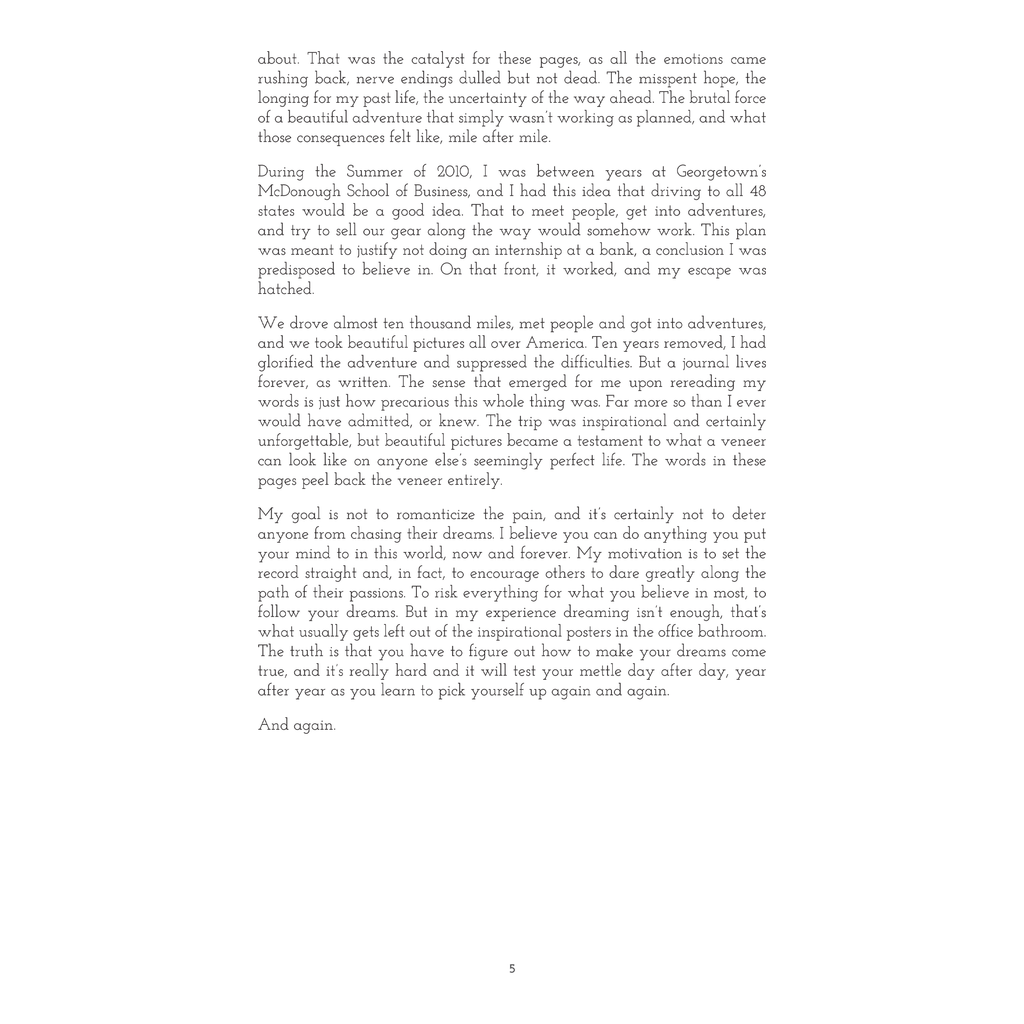 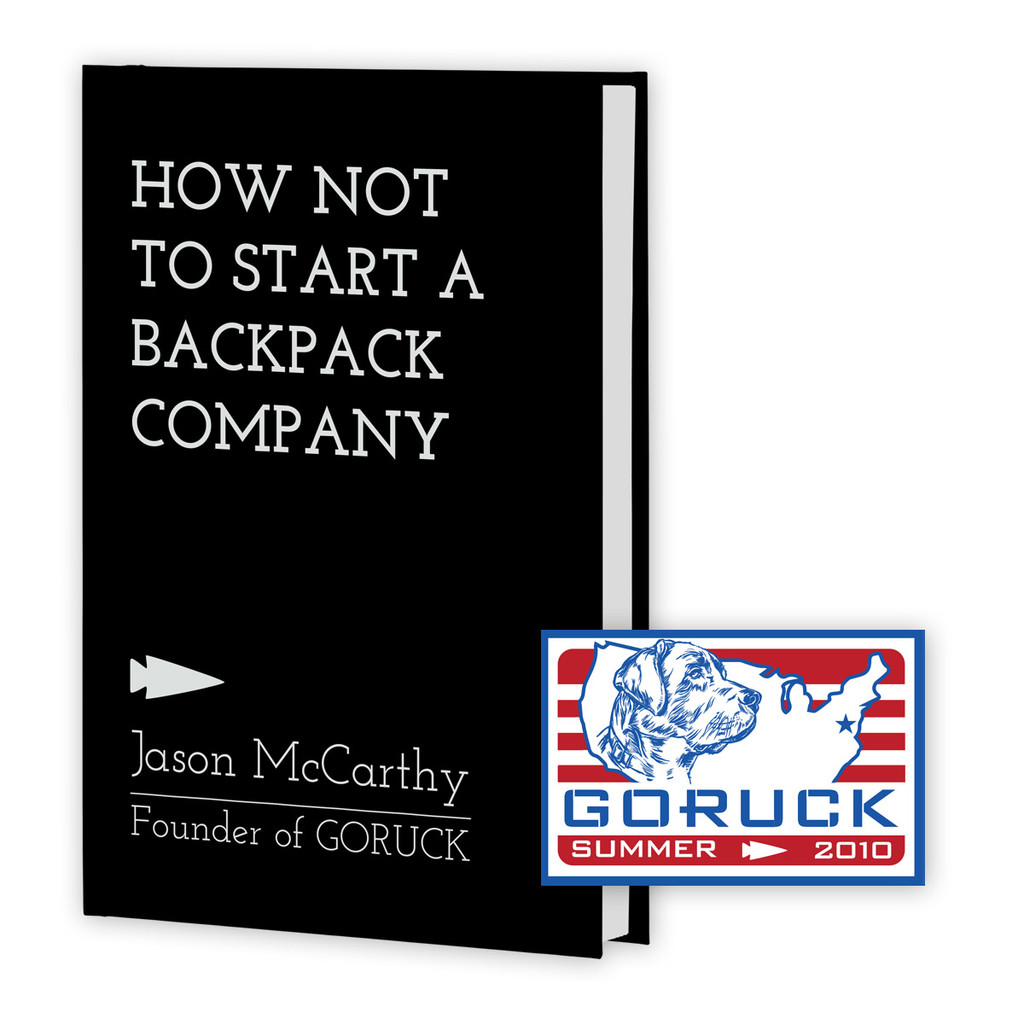 How Not to Start a Backpack Company (Limited Edition Hardback + Patch) 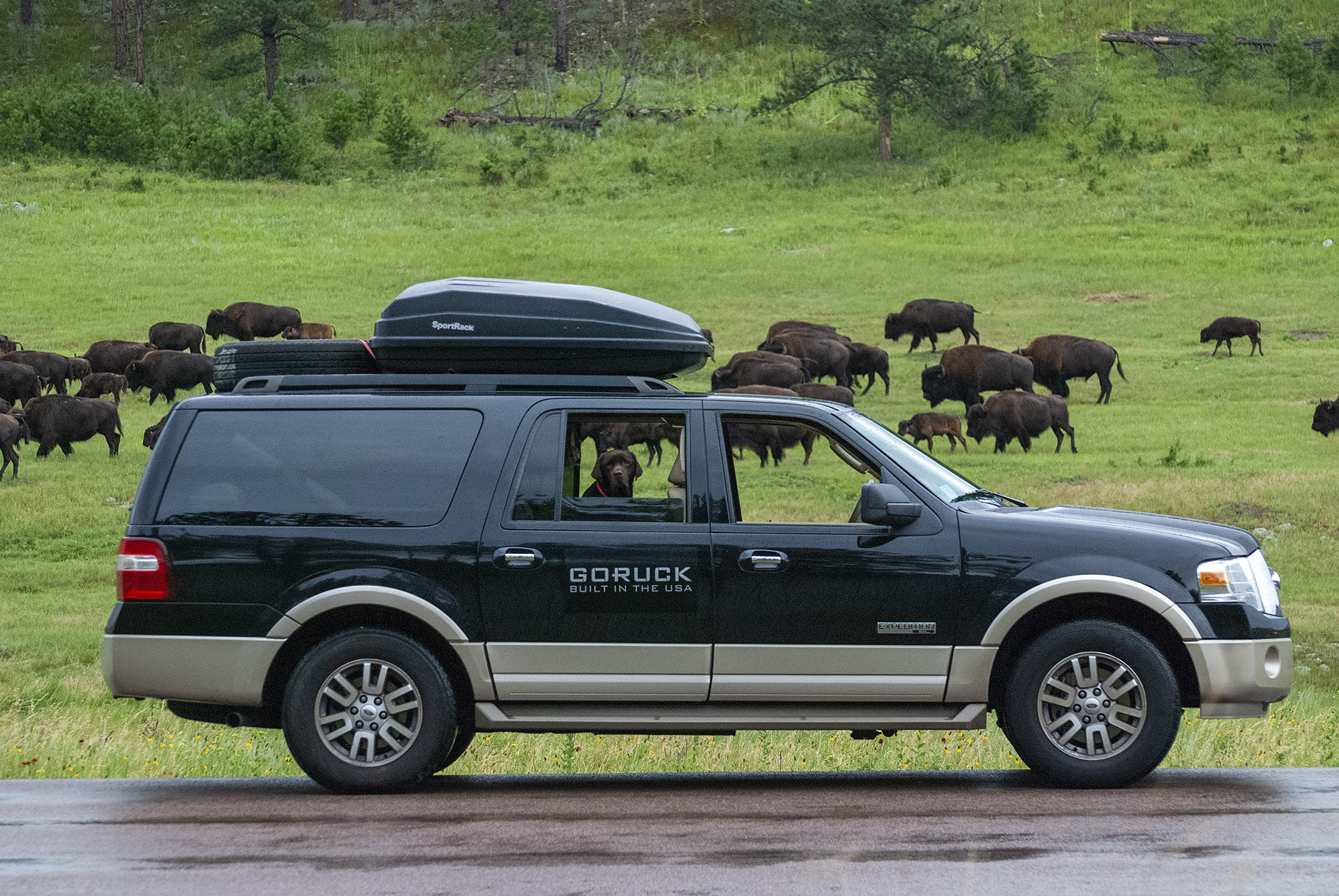 How Not to Start a Backpack Company

My life was a mess. I had just gotten out of the military, I was going through a divorce from the only love of my life, and the financial crisis was in full swing.

My company, GORUCK, was little more than a hobby in the Summer of 2010. I was broke and thought I had nothing to lose, so my dog Java and I hit the open roads to visit all 48 contiguous states, to meet people and get into adventures. I thought we could sell a few backpacks, too.

I was searching for something, I just didn’t know what. And I found some answers, just not the ones I expected.

Since Jason and I got back together, I find myself glossing over the tough times when the inevitable questions come up in casual conversation. I feel relieved that we worked out - yet disingenuous because it was far from pretty or easy to reach where we are today. So while the idea of this book and its actual coming into existence makes me uncomfortable, ultimately I trust that sharing our struggle is cathartic for me and helpful to others who need to believe in a life worth living after the fairy tale comes crashing down. 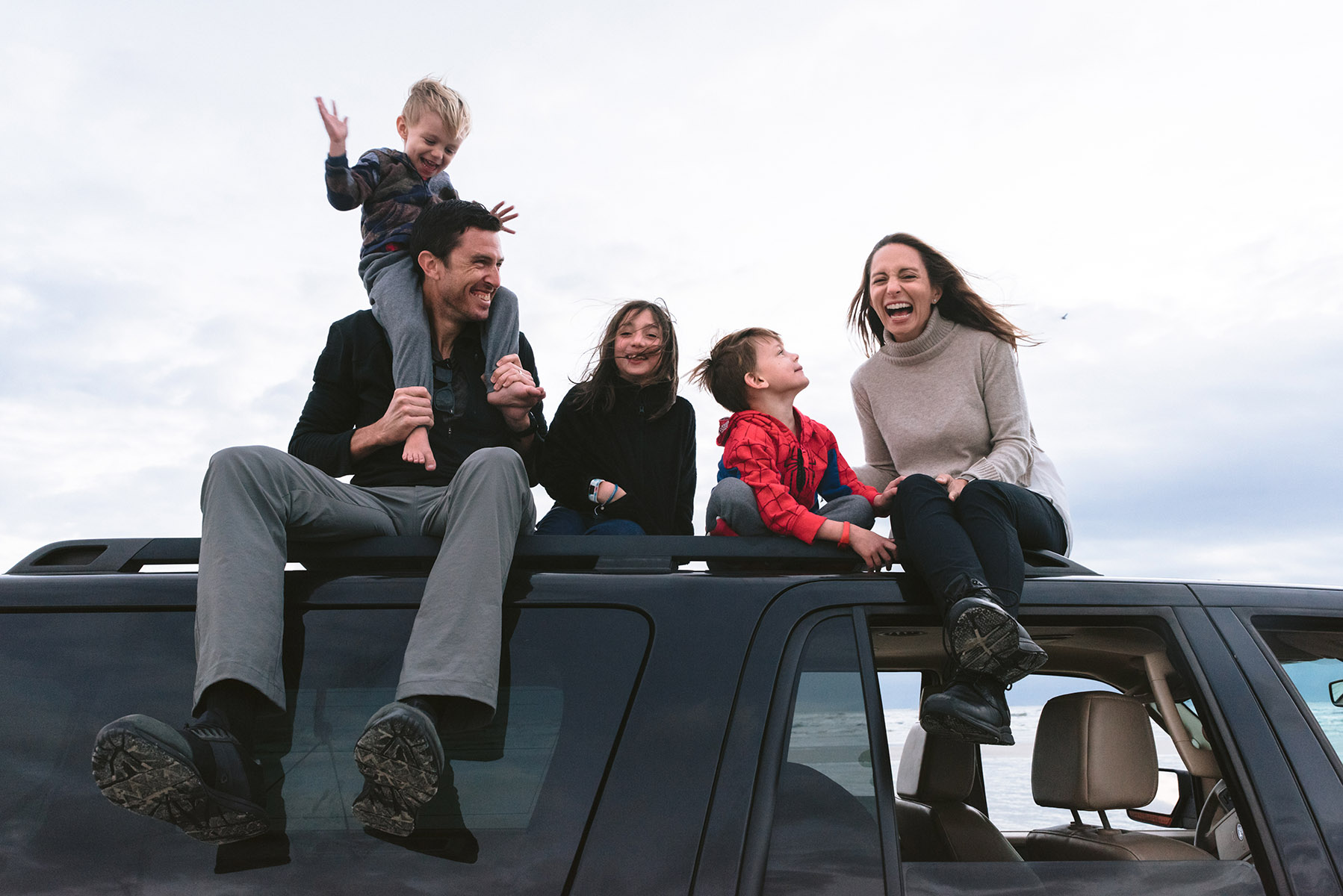 I’ve never read anything like this, and it took me a couple days to fully process. To me, the overarching theme of this story is "lost and found" — losing the love of your life, losing your way, and finding a path back to both. It’s way more of a love story than the title gives it credit for. Jason is a great storyteller with a great story to tell. -HH

This isn’t your average business book. It’s not a principle-preacher. It’s a testimony, a glimpse into the REAL life of an entrepreneur. Full of drama, tears, dopamine, and fear... you’ll learn that success and legacy isn’t happenstance. This is an inspiring story that embodies the resilience and backbone of the American economy. -ZE

This story is iconic in an On the Road, travels of Kerouac kind of way, but for a new generation. Jason’s voice is unmistakable, and timely, representing the force of utter desperation in love and loss and identity. And what it looks like as it all falls apart. I can see why it took a while for this to come out. There are a lot of sparking frayed wires exposed. But man, what a story, and a full life he’s led. It’s a rewarding read, and of course Java is epic. -DZ

The publishers I chatted with wanted this story to be more of a business book with bullet points and to-do lists. Or they wanted it to be about how my life was like a bad country song where I had a broken heart and a dog and a bottle of whiskey. I wanted to one-up them both, and just give you both sides of building a business amidst personal chaos.

So I decided to bypass them, and go direct to you, just like we did with GR1 way back when. 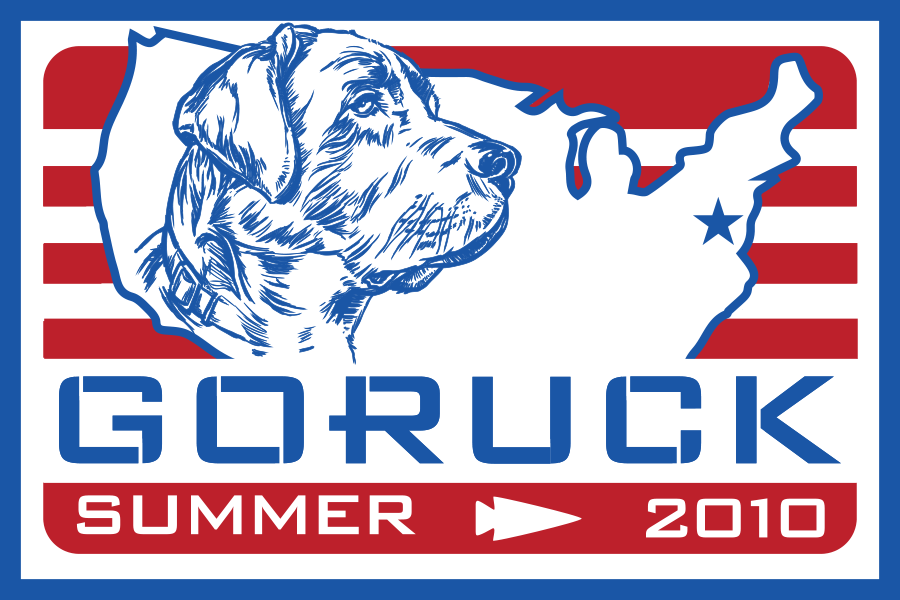 You break it, we fix it. All GORUCK built gear, apparel, and footwear comes with our Scars Lifetime Guarantee. Does not apply to third-party gear and apparel.

All USA orders over $35 to the lower 48 qualify for FREE No-Rush Shipping. No promo code needed. Does not apply to international orders.

Don't like it? Send back any full-priced item within 30 days of delivery with free return shipping in the USA. Does not apply to closeout items on sale.